The Titanic challenge hosted by Kaggle is a competition in which the goal is to predict the survival or the death of a given passenger based on a set of variables describing him such as his age, his sex, or his passenger class on the boat.

I have been playing with the Titanic dataset for a while, and I have recently achieved an accuracy score of 0.8134 on the public leaderboard. As I'm writing this post, I am ranked among the top 4% of all Kagglers.

To make this tutorial more "academic" so that anyone could benefit, I will first start with an exploratory data analysis (EDA) then I'll follow with feature engineering and finally present the predictive model I set up.

Throughout this jupyter notebook, I will be using Python at each level of the pipeline. The main libraries involved in this tutorial are:

A very easy way to install these packages is to download and install the Conda distribution that encapsulates them all. This distribution is available on all platforms (Windows, Linux and Mac OSX).

This is my first attempt as a blogger and as a machine learning practitioner.

If you have a question about the code or the hypotheses I made, do not hesitate to post a comment in the comment section below. If you also have a suggestion on how this notebook could be improved, please reach out to me. This tutorial is available on my github account.

Hope you've got everything set on your computer. Let's get started.

As in different data projects, we'll first start diving into the data and build up our first intuitions.

In this section, we'll be doing four things.

We tweak the style of this notebook a little bit to have centered plots.

We import the useful libraries.

Two datasets are available: a training set and a test set. We'll be using the training set to build our predictive model and the testing set to score it and generate an output file to submit on the Kaggle evaluation system.

We'll see how this procedure is done at the end of this post.

Pandas allows you to have a sneak peak at your data.

The Survived column is the target variable. If Suvival = 1 the passenger survived, otherwise he's dead. The is the variable we're going to predict.

The other variables describe the passengers. They are the features.

Pandas allows you to a have a high-level simple statistical description of the numerical features. This can be done using the describe method.

The count variable shows that 177 values are missing in the Age column.

One solution is to fill in the null values with the median age. We could also impute with the mean age but the median is more robust to outliers.

Let's visualize survival based on the gender.

It looks like male passengers are more likely to succumb.

Let's plot the same graph but with ratio instead.

The Sex variable seems to be a discriminative feature. Women are more likely to survive.

Let's now correlate the survival with the age variable.

As we saw in the chart above and validate by the following:

Now, we see that:

These violin plots confirm that one old code of conduct that sailors and captains follow in case of threatening situations: "Women and children first !". 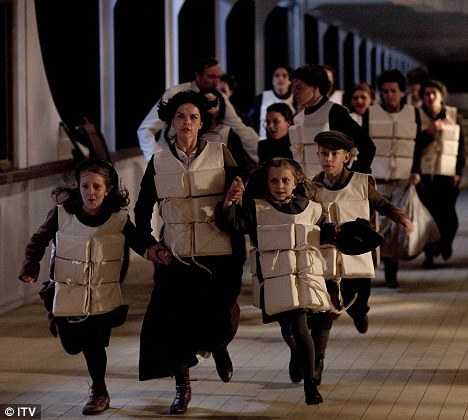 Let's now focus on the Fare ticket of each passenger and see how it could impact the survival.

Ok this is nice. Let's now combine the age, the fare and the survival on a single chart.

The size of the circles is proportional to the ticket fare.

On the x-axis, we have the ages and the y-axis, we consider the ticket fare.

We can observe different clusters:

As a matter of fact, the ticket fare correlates with the class as we see it in the chart below.

Let's now see how the embarkation site affects the survival.

It seems that the embarkation C have a wider range of fare tickets and therefore the passengers who pay the highest prices are those who survive.

Let's now stop with data exploration and switch to the next part.

In the previous part, we flirted with the data and spotted some interesting correlations.

In this part, we'll see how to process and transform these variables in such a way the data becomes manageable by a machine learning algorithm.

We'll also create, or "engineer" additional features that will be useful in building the model.

We'll see along the way how to process text variables like the passenger names and integrate this information in our model.

We will break our code in separate functions for more clarity.

But first, let's define a print function that asserts whether or not a feature has been processed.

One trick when starting a machine learning problem is to append the training set to the test set together.

Let's load the train and test sets and append them together.

Let's have a look at the shape :

train and test sets are combined.

When looking at the passenger names one could wonder how to process them to extract a useful information.

If you look closely at these first examples:

You will notice that each name has a title in it ! This can be a simple Miss. or Mrs. but it can be sometimes something more sophisticated like Master, Sir or Dona. In that case, we might introduce an additional information about the social status by simply parsing the name and extracting the title and converting to a binary variable.

Let's see how we'll do that in the function below.

This function parses the names and extract the titles. Then, it maps the titles to categories of titles. We selected :

Let's check if the titles have been filled correctly.

There is indeed a NaN value in the line 1305. In fact the corresponding name is Oliva y Ocana, Dona. Fermina.

This title was not encoutered in the train dataset.

Perfect. Now we have an additional column called Title that contains the information.

We have seen in the first part that the Age variable was missing 177 values. This is a large number ( ~ 13% of the dataset). Simply replacing them with the mean or the median age might not be the best solution since the age may differ by groups and categories of passengers.

To understand why, let's group our dataset by sex, Title and passenger class and for each subset compute the median age.

This dataframe will help us impute missing age values based on different criteria.

Look at the median age column and see how this value can be different based on the Sex, Pclass and Title put together.

Let's create a function that fills in the missing age in combined based on these different attributes.

Perfect. The missing ages have been replaced.

This function drops the Name column since we won't be using it anymore because we created a Title column.

Then we encode the title values using a dummy encoding.

You can learn about dummy coding and how to easily do it in Pandas here.

This function simply replaces one missing Fare value by the mean.

This functions replaces the two missing values of Embarked with the most frequent Embarked value.

We don't have any cabin letter in the test set that is not present in the train set.

This function replaces NaN values with U (for Unknow). It then maps each Cabin value to the first letter. Then it encodes the cabin values using dummy encoding again.

This function maps the string values male and female to 1 and 0 respectively.

This function encodes the values of Pclass (1,2,3) using a dummy encoding.

This part includes creating new variables based on the size of the family (the size is by the way, another variable we create).

This creation of new variables is done under a realistic assumption: Large families are grouped together, hence they are more likely to get rescued than people traveling alone.

We end up with a total of 67 features.

In this part, we use our knowledge of the passengers based on the features we created and then build a statistical model. You can think of this model as a box that crunches the information of any new passenger and decides whether or not he survives.

There is a wide variety of models to use, from logistic regression to decision trees and more sophisticated ones such as random forests and gradient boosted trees.

For more details about why ensemble methods perform well, you can refer to these posts:

Back to our problem, we now have to:

Keep in mind that we'll have to reiterate on 2. and 3. until an acceptable evaluation score is achieved.

To evaluate our model we'll be using a 5-fold cross validation with the accuracy since it's the metric that the competition uses in the leaderboard.

To do that, we'll define a small scoring function.

Recovering the train set and the test set from the combined dataset is an easy task.

We've come up to more than 30 features so far. This number is quite large.

When feature engineering is done, we usually tend to decrease the dimensionality by selecting the "right" number of features that capture the essential.

In fact, feature selection comes with many benefits:

Let's have a look at the importance of each feature. 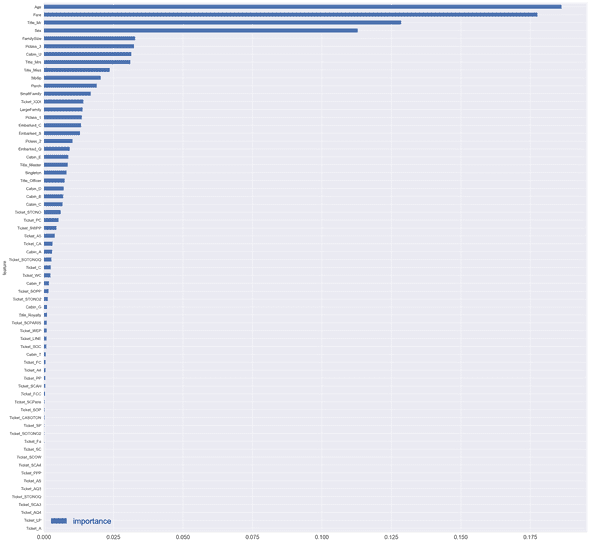 As you may notice, there is a great importance linked to Title_Mr, Age, Fare, and Sex.

There is also an important correlation with the Passenger_Id.

Yay! Now we're down to a lot less features.

We'll see if we'll use the reduced or the full version of the train set.

As mentioned in the beginning of the Modeling part, we will be using a Random Forest model. It may not be the best model for this task but we'll show how to tune. This work can be applied to different models.

Random Forest are quite handy. They do however come with some parameters to tweak in order to get an optimal model for the prediction task.

To learn more about Random Forests, you can refer to this link :

Now that the model is built by scanning several combinations of the hyperparameters, we can generate an output file to submit on Kaggle.

To have a good blending submission, the base models should be different and their correlations uncorrelated.

In this article, we explored an interesting dataset brought to us by Kaggle.

We went through the basic bricks of a data science pipeline:

This post can be downloaded as a notebook if you ever want to test and play with it : my github repo

Lots of articles have been written about this challenge, so obviously there is a room for improvement.

Here is what I suggest for next steps:

I would be more than happy if you could find out a way to improve my solution. This could make me update the article and definitely give you credit for that. So feel free to post a comment.

How to score 0.8134 in #Titanic @Kaggle Challenge https://t.co/YQwJN4JjUT #MachineLearning pic.twitter.com/QQrXO5p0p3

How to mine newsfeed data 📰 and extract interactive insights in Python